When baby gorillas are rescued from poaching, they often need to relearn wild gorilla skills. They may have been in captivity or in poor circumstances for extended periods. GRACE specializes in helping rescued gorillas learn the skills they need to survive in the wild, with access to:

GRACE is the only sanctuary in the world for critically endangered Grauer’s gorillas. Our rehabilitation focus prioritizes the welfare of every individual gorilla in our care, with the ultimate goal of preparing the gorillas for reintroduction back into the wild.

The forest habitats at GRACE are one essential part of the gorillas’ rehabilitation. The forests give the gorillas a safe area to hone critical survival skills like coordinating group travel, finding and processing wild foods, and building nests in trees and on the ground for sleeping.

What’s So Special About the Forest Habitats at GRACE?

The fence line surrounding one of the forest habitats at GRACE. © Andrew Bernard & GRACE

The original 24-acre forest habitat at GRACE, constructed in 2015, constitutes the world’s largest gorilla enclosure. The enclosure is located in natural Grauer’s gorilla habitat in eastern DR Congo. More than 200 people from local communities–over half of them women–worked with GRACE to build the first forest habitat.

When the doors to the forest habitat were first opened in March of 2015, the GRACE gorillas had not been in a forest for years. For some of them, it was their first forest experience since being captured from the wild.

It was unclear how the group would react to their new surroundings, but upon entering the enclosure, the gorillas – led at that time by the group’s dominant female, 13-year-old Pinga – immediately began feeding on vegetation and exploring the forest. Within minutes, the younger gorillas were climbing and playing in trees.

In 2018, we added a second enclosure of 15 acres. The gorillas now have access to a total of 39 acres of forest habitat. We alternate the gorillas between the two habitats to allow time for plants to regrow in the dormant habitat.

Now, the gorillas spend most of their time every day together in the forest habitats — and they’ve gone a long way in developing survival skills that can only be learned in the forest.

Keeping the Family Together: Group Travel

Each of the 14 Grauer’s gorillas at GRACE was rescued as a lone infant, after losing their families to poaching. They all arrived in our care at less than 3 years of age. Despite the trauma and in some cases isolation of their early lives, over time this little group has developed in to a family not unlike those seen in the wild.

In the wild, groups are centered around the silverback leader who protects them from outside threats, including males from other groups. The GRACE group has a dominant silverback (aged around 12), adult females (in their 20s), young males (or “blackbacks”), and younger females – including Lulingu, the youngest gorilla at GRACE who is now about six years old.

At GRACE, silverback male Kighoma decides the path the group should take in the forest each day. Like any good silverback, Kighoma exhibits protective behaviors like coming out to investigate strange noises and posturing when threatening situations arise (e.g., people unknown to the gorillas are around). Kighoma is young still, and in his early days of leading the group he was more likely to keep eating his food and not be bothered to protect the group. But now, he takes his job seriously. He is often seen standing in a big, confident stiff stance, asserting his dominance while watching over his group.

Although Kighoma is the undisputed leader of the group, GRACE caregivers are noticing sub-grouping at times when the gorillas are foraging in the forest. Sometimes a sub-group will be led by Lubutu, a younger but growing male, and sometimes by adult female Pinga who led the group for a time before Kighoma was a silverback.

We are watching carefully how the dynamics in the group shift as the gorillas age. But for now, Kighoma’s leadership is unquestioned!

The 39 acres that make up the GRACE forest habitats contain at least 119 different species of plant, 85% of which are known to be eaten by gorillas. Gorillas use their hands and teeth to manipulate plants to get to the good food inside—stripping plants for the tasty inside pith, or avoiding prickles and stings. Despite the huge amount that the gorillas eat, they can appear very deliberative in the process.

As GRACE’s Program Manager Dr. Katie Fawcett puts it: “I think one of my favorite things when watching gorillas feeding is how their huge fingers delicately manipulate their food. And I love how selective the gorillas are from a seemingly vast salad bowl of vegetation!”

Some of the gorillas’ favorite foods are the banana palm and elephant grass. Elephant grass in particular is important, because it’s used to construct nests for resting during the day and for sleeping at night. High-ranking females in the group will often try to keep big piles of elephant grass all to themselves.

In the lives of the GRACE gorillas, it is an important plant indeed!

Is it Bedtime Yet? Building Nests 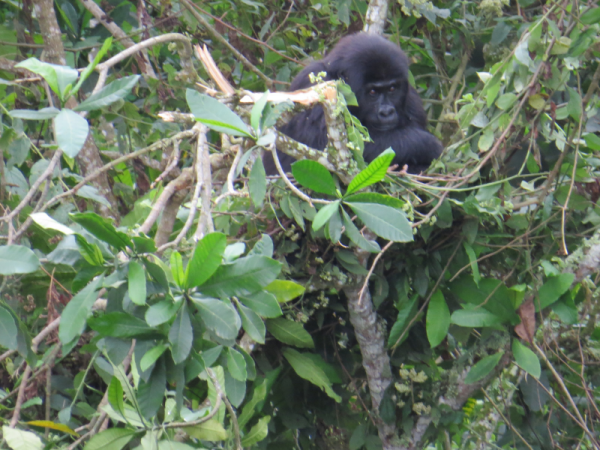 Young female Lulingu rests in a nest she made on her first day inside the GRACE forest. © GRACE

A gorilla will make a new nest for sleeping every single night and sometimes also during the day for resting.

The nests are made by layering vegetation in a circle around the gorilla’s body. Sometimes nests are made with the same food that they have been eating! In the wild, the place where the gorillas stop for the night is usually close to where they last fed.

All gorillas from the age of about four will make their own nest each night. Sometimes, if an adult female dies or transfers out of the group when her infant is still young, the young gorilla will nest together with the silverback in the group. When conservationists are counting gorillas in the forest, often they are actually counting gorilla nests as gorillas themselves are hard to find!

This has been a particularly popular nesting spot in the forest habitat lately. We’ve seen several gorillas resting in this area – here, adult female Serufuli makes herself comfortable.

And Of Course: Playtime, Naptime, and Time with Friends

No day in the life of a gorilla is complete without a little playtime, naptime, and general lounging around with your friends. Gorillas are one of our closest relatives, and their habits in the forest are a great reminder of the similarities between humans and gorillas. 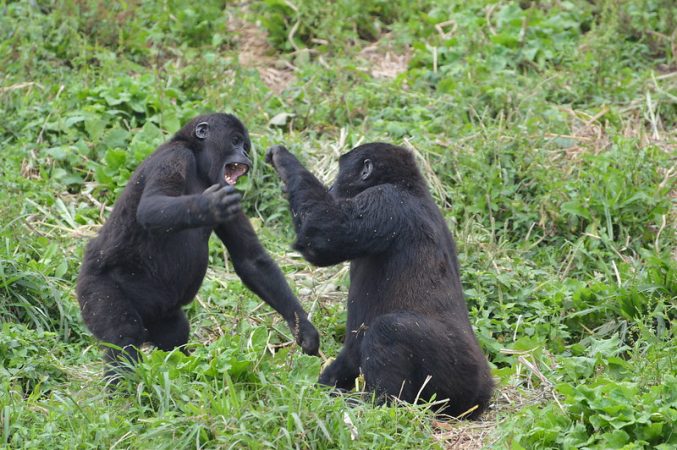