Can a New Type of Glacier on Mars Aid Future Astronauts?

Can a New Type of Glacier on Mars Aid Future Astronauts? 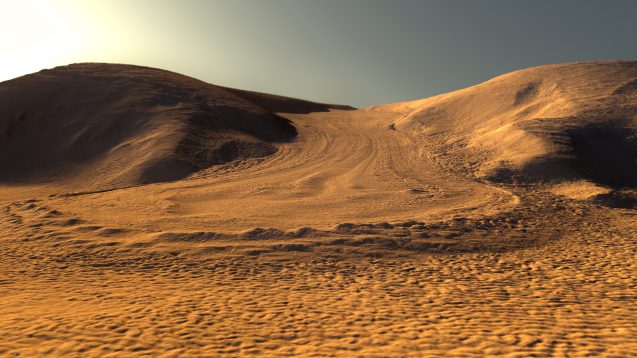 An artist’s rendering from NASA HiRISE data of a mid-latitude glacier on Mars, insulated by a surface layer of dust and rock. Located at Mesa Wall in Protonilus Mensae on Mars. Source: Kevin Gill / Flickr

On April 21, 1908, near Earth’s North Pole, the Arctic explorer Frederick Albert Cook scrawled in his diary a memorable phrase: “We were the only pulsating creatures in a dead world of ice.” These words may soon take on new significance for humankind in another dead world of hidden ice, submerged beneath the red sand of its frigid deserts. This dead world is Mars, and the desert is the planet’s mid-latitude region known as Arcadia Planitia.

Sharon Hibbard is a Ph.D. candidate in geology and planetary science at the University of Western Ontario and the lead author of a new scientific paper on glaciers and glacier-like activity in Arcadia Planitia, recently published in Icarus. Hibbard and associates have identified evidence of a glacier in this region that defies expectations and, due to its unique characteristics, could serve as a water source for future human landings and exploration.

Evidence of Martian glaciers, referred to more cautiously by the scientific community as “viscous flow features”, were first investigated in the 1970s using satellite imagery from NASA’s Viking program, the second and third spacecraft to reach the surface of Mars. Scientists were intrigued by widespread ripples and flows in the Martian surface, many with moraine-like features that bore striking resemblance to the glacial landscapes of Earth.

The new study investigates viscous flow features in the lower mid-latitudes of Arcadia Planitia, exhaustively mapping dozens of surface features likely produced by Mars’ subterranean glaciers made of water ice. In the process of mapping, the team found something rather unexpected: evidence of ice flow in a large, flat plain. This type of ice flow is not commonly seen on Mars, where most of the prominent ice-related features take the form of ripples and furrows in valleys and on hillsides where gravity can prompt ice to flow downhill. Hibbard’s team found these “sinuous features” in a flat-lying region of Arcadia Planitia, mysteriously isolated from any bluffs or slopes. How could this ice in the plains of Arcadia Planitia possibly be flowing?

Examining the presence of water on Mars

Informed guesses about the existence of water and ice on Mars preceded the era of spaceflight by hundreds of years. Telescopic observation of Mars’ greater landforms and polar ice caps led astronomer William Herschel to speculate in 1784 that the red planet was populated by intelligent life.

Advances in telescope technology had largely dispelled this theory by the 20th century, but the existence of water and water ice on Mars remained uncertain until the first orbiters and landers arrived in the 1970s. Not only did NASA’s Viking program discover trace amounts of atmospheric water vapor, but its orbital imagery also revealed the existence of numerous glacier-like features. Exposed water ice sublimates away in the low pressures and freezing temperatures present on the surface of Mars, so if water ice glaciers were responsible for the observed Earth-like flows, researchers conjectured that the ice must be protected by a thick layer of debris. Further observations confirmed this hypothesis, and in ensuing decades the scientific community proceeded to map, catalog and categorize many thousands of glacier candidates with varying degrees of confidence. Over time, our capabilities grew from speculation in telescope eyepieces to precise, on-site observations across the electromagnetic spectrum.

The presence of water ice below the surface of Mars was confirmed in 2008 by the Phoenix lander, reinforcing the findings of Mars Odyssey, whose sensors indicated massive amounts of subsurface water ice at the more temperate mid-latitudes in 2002. For example, the subterranean water ice of the flat Arcadian plains was directly measured by Mars Reconnaissance Orbiter’s radar and found to begin 6 centimeters below the surface layer of dust and debris, and extend downward to an average depth of 38 meters. 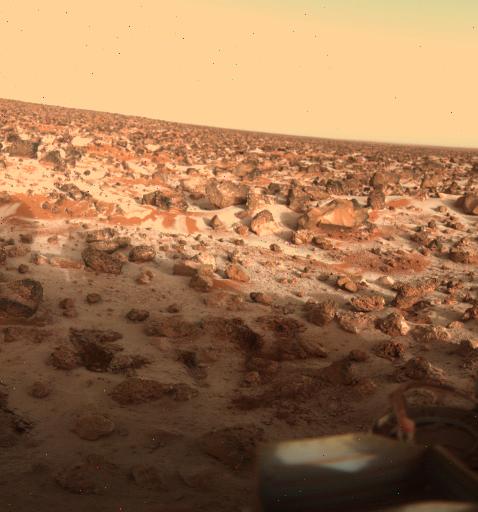 Water frost on the surface of Mars, captured by the Viking Lander 2 on May 18, 1979. Source: NASA/JPL

Seeing to the bottom of an ice sheet to discern what makes it flow is no easy task, and only grows more complex when the ice sheet is 170 million miles away. Fortunately, the mysterious flow features Hibbard’s team found in the flat Arcadian plains are not unique in this solar system—in fact, we need not travel far at all to study an analog. Hibbard and associates identified remarkable similarities to Antarctica’s ice streams, regions in its flat ice sheets where a certain volume of ice moves more rapidly than its surroundings.

While contemporary science still lacks a detailed understanding of what causes these ice streams on Earth, researchers have inferred that subsurface topography and melting at the bottom of the ice sheet may both play a role. Hibbard notes that the Arcadian flows exhibit several of the key features of Earth’s ice streams. The Arcadian ice has since stopped flowing, accumulating a thicker layer of surface debris, becoming a stagnant ice stream.

“Finding possible flow features in this flat-lying region was very exciting” said Hibbard in an interview with GlacierHub. “Previous studies have suggested there is a buried ice sheet at our study site, and our evidence of channelized ice within this ice sheet indicates that there are more complex glacial dynamics at hand on Mars.”

These unique characteristics of the Arcadian plains ice sheet raise another question, one that William Herschel certainly would have loved to hear: could the water ice be extracted and used by human astronauts?

While most Martian glaciers and their subsurface ice lie near bluffs and on slopes, this ice sits near the surface and forms a temperate, flat ice sheet covered with few boulders or other geographical hazards. It would make for an ideal landing site. Hibbard proposes that this region is “favorable for future in situ resource utilization and human missions,” due to the sheer volume and reasonable purity of the near-surface ice.

Nilton Renno, an astrobiologist at the University of Michigan emphasizes the difficulty of water ice extraction on Mars, writing to GlacierHub that “[many] glaciers are in regions more challenging for human exploration because of the lower temperatures during the winter and topography,” even though “in high latitudes, the water ice is easily accessible.” The Phoenix Lander easily uncovered subsurface water ice at high northern Martian latitudes, an area humans are unlikely to visit due to its extreme cold and lack of sunlight.

Germán Martínez, a staff scientist at the Lunar and Planetary Institute in Houston, affirms the feasibility of the mid-latitude Arcadia Planitia as a landing site, writing to GlacerHub that “in general, it’s more feasible to go to low and mid latitudes, where temperatures are milder and solar energy is available throughout the year … in these mid and low latitudes, though, water ice is typically deeper in the subsurface than in polar latitudes.”

The shallow ice found by Hibbard and associates stands apart from this trend, only slightly buried and much more easily accessible than other water ice deposits typically found at mid-Martian latitudes. In time, the frozen water in Arcadia Planitia may see the surface once more, finding use at the hands of future astronauts, transforming the dead surface of an icy world into one with a little more life.