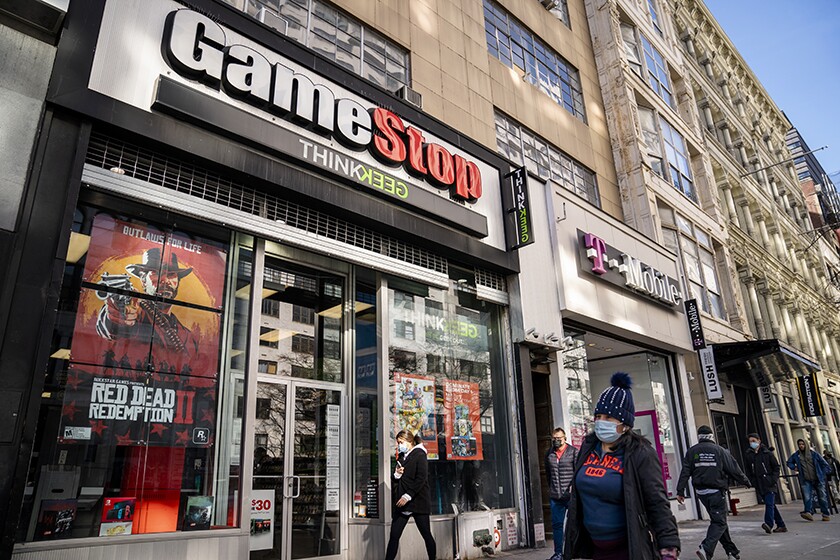 “Boy, this could have changed my life as a kid.”

That was my first thought when I heard that ordinary day traders were potentially making thousands off of GameStop stock — a struggling, not beloved company — due to, essentially, a running joke that had morphed into a meme-driven movement. It certainly delivered a lesson more clearly than any school program.

With a short attention span, a love for games and a distaste for all things math, I was on the verge of failing my junior high school’s economics unit, a multimonth program that assigned jobs and salaries to students and asked us to pay bills, stay out of debt and learn the basics of Wall Street. I learned, of course, how to do none of those things.

Back then, there was no Reddit forum such as r/WallStreetBets using comic book memes to rile me up, foul language to make me feel I was in some forbidden, grown-up masculine world, and clever, highly visual slang crafted to celebrate a move well played. There was no investing advice for an easy-to-use app named after a working-class symbol and framed as revolutionary speak, with followers asking users to brag about their spoils on social media with what are more or less digital stickers akin to the ones that we receive from a video game accomplishment.

Culture — and fandom — had not yet been completely gamified.

Instead, teenage me was just paranoid that I’d have to write a bunch of essays, which was the punishment for failing in my simulated, eighth-grade life. I needed a way to, if not break the rules, find a way to make them work in my favor, to come up with some sort of video game-like “cheat code” that would allow me to win.

And that’s what I did. I remembered my dad had a camcorder, so I suggested that we bring in a television and allow me to charge my peers with their Monopoly bills to watch a “television network” tailored to our the economic unit. I basically made a bad “Saturday Night Live”-like variety show, less sophisticated than most of today’s TikTok dance clips, but it did the trick. I went from being make-believe homeless to the wealthiest kid in class in the span of two weeks. I was drowning in fake money — or, in the parlance of r/WallStreetBets, “tendies.”

I thought I was a preteen genius. But the real lesson and one highlighted by the collective gag that sent GameStop stock rocketing past actual successful businesses was that the American economy, and sometimes who benefits from it, comes down to little more than a joke. In other words, those who know how to play the game.

The tendies won from GameStop, however, are real, with long-term ramifications that could lead to much needed reform. “Tendies,” by the way, stems from the act of eating celebratory chicken tenders, thus making it a phrase with classist implications, and most of Reddit thinks of only the joke rather than the implications.

There’s been a gleefulness to the media coverage regarding what has been happening to the GameStop stock, which was in decline Monday but went above $480 last week after spending much of last summer trading below $5 a share. Multiple media outlets, for instance, branded many of those behind the movement as “misfits,” noting that while the group is varied with many a motive, a fair amount of these unlikely bettors and investors see themselves as cultural disruptors and jokesters, language that intentionally or not recalled past progressives such as the Yippies.

Some members do see themselves that way, no doubt. Few people, as one of our own editorials noted, have sympathy for “Wall Street mavens.” Stories posted on Reddit and in the media of people who lost jobs in the pandemic and finally were able to pay bills after cashing out GameStop stock, underscore the urgency of addressing America’s widening wealth gap.

But one can view the GameStop story as only a joke, silly or even purely a force for good if it’s seen in a vacuum rather than what is: part of a broader piece of online-driven, fandom-culture filled with sarcasm, games, coded language and a whole lot of entitlement.

No matter how many people have attempted to explain it or how many articles I’ve read, I still can’t find a clear definition of what a “stonk” is, other than a meme-driven term to mock stocks and to celebrate the idea of holding onto GameStop stock to thwart hedge fund investors.

Tesla founder and billionaire Elon Musk has become a cheerleader for the movement, thanks in part to him shouting “Gamestonk” in a tweet. But I’m pretty sure Musk has opinions on Wall Street, short sellers and hedge funds that would likely clash with someone’s ability to pay off their student loans. And yet heroes in our culture — sometimes Donald Trump, sometimes the Zack Snyder “cut” of a “Justice League” film, sometimes a seller of video games that has no real business still being in business — come and go based on their entertainment factor.

The damage wrought? Overshadowed, it seems, by the new “it” meme.

It’s easy to shout a story when the targets are viewed with distrust by the vast majority of Americans, as is Wall Street. And yet, this moment is simply the latest example — and perhaps most notable for its broad appeal — of a modern America where pop culture and politics are intertwined, where the trappings of fandom and game culture rule the conversation.

There are more than a few similarities between the Reddit-fueled cries of tearing down hedge funds and the Reddit-fueled charge of insisting that “Ghostbusters” not star four women. Both causes were taken to the masses with memes, and both fell back on the idea that if you disagreed, it was all a joke. It’s a thin line between sexism and liberation from capitalism.

When the GameStop story broke, some compared it to the legacy of Trumpism or even a smaller but still dangerous movement known as Gamergate. Both, broadly speaking, exploited online groups who saw themselves as the victims of perceived wrongs.

That’s an oversimplification. Gamergate, for instance, was a targeted harassment campaign against largely female game developers and journalists, a fear that games would move beyond their predictable white male heroes. When it comes to GameStop, I do not believe the audiences and the participants are the same, but it would be naive to believe they aren’t interconnected, part of an online belief that enough memes — and harassment, as reportedly, hedge fund managers were doxxed — can make a point.

Underlying it all is a broader viewpoint that considers all of culture some sort of game board. Don’t like the way the filmmakers behind “Sonic the Hedgehog” drew the main character? Harass them, and maybe you’ll win a change. Unhappy with a “Star Wars” film? Stick it to ‘em by driving one of their stars off social media. Disappointed with politics? Let’s see what happens when this guy from a reality show becomes president. Frustrated with the stock market? Turn a failing business into one that can make people rich, if even only for a week.

As someone who specifically requested to write about games — and believes play is our most powerful storytelling medium — the only thing that truly concerns me about games is some aspects of the culture that come with it. I saw the rise of QAnon, for instance, as more or less an alternate reality game, one that feeds followers narrative puzzles and in-the-know phrases to be devoured. Only in this case, QAnon is planting ideas that can be seen in news reports — and echoed by our former presidential administration — rather than simply Marvel putting symbols in “WandaVision.”

But when everything is a game, everything is a joke and vice versa. So, smile when you pose with that stolen lectern from the Capitol and laugh when you make thousands off a failing company. Different people, different causes, but it’s all rooted in the same internet-fueled principles. No wonder, then, Republicans and Democrats have appeared aligned on the GameStop saga. It’s one thing to think the revolution will not be be televised, but it’s a whole other challenge when it’s memed and gamified.

We’re not entering a new era of bipartisanship so much as we are moving forward into chaos.

Welcome to a world where the next target could be Wall Street, the new “Halo” game or, perhaps the unthinkable, the United States Capitol. And here’s the uncomfortable secret most every game player knows: Games don’t often have good endings. What matters is how you play.